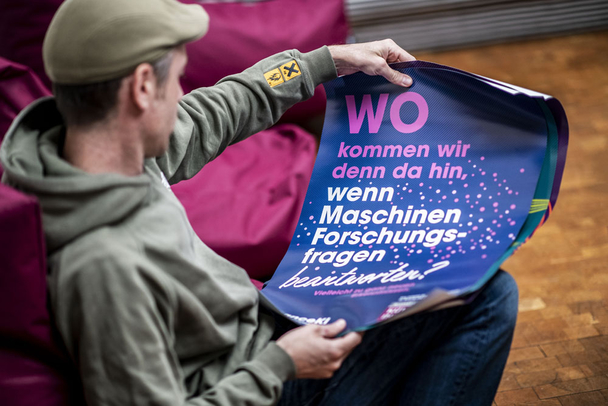 What happens when street art is inspired by research into artificial intelligence (AI)? This is the question at the heart of “Researching City Walls”, the University of Freiburg’s project as part of the Science Year 2019 on Artificial Intelligence promoted by the Federal Ministry for Education and Research. The goal is to bring art and science together in the center of Freiburg: with street art on the subject of AI in five giant murals, as well as ornamenting one tram – accompanied by interactive guided tours, discussion events, a workshop for teenagers and an exhibition.

‘Freiburg is the ideal place for “Researching City Walls”,’ says Prof. Dr. Hans-Jochen Schiewer, rector of the University of Freiburg. ‘Research into artificial intelligence at the University of Freiburg is an important focus with an international profile. The research activities are incorporated in a variety of subjects that enables us to deal with the ethical, legal and social consequences of this future technology from different scientific perspectives. A dialogue with the public is especially important to us in this context. Combining scientific and artistic aspects, the “Researching City Walls” project introduces entirely new, contemporary possibilities to the communication of science and the social debate about future technologies. It brings life to the motto “Connecting Creative Minds” which stands for the future development of the University of Freiburg.’

Besides conveying themes and scientific content, the Science Year aims to initiate and drive debate about developments in research. Since AI potentially has massive consequences for society, “Researching City Walls” aims to make the topic accessible to the public, inform them about latest developments in research, and enable discussion with participation open to all. At the heart of it all are the murals: each mural is developed in collaboration between one street artist and one AI scientist. ‘When artists take up the themes of research and engage with scientists they bring new perspectives to the questions, especially when they open up aspects of research that are relevant to society,’ says Oliver Müller, professor of contemporary philosophy and philosophy of technology and head of the Nexus Experiments project, an art and science initiative of the University of Freiburg and the BrainLinks-BrainTools Cluster of Excellence, which is behind “Researching City Walls”. ‘In order for the works of art to initiate the broadest possible discussion about the effects of AI, they shouldn’t be in a gallery but visible in the public space of Freiburg city center. The medium of street art is particularly well suited to this.’

The project arose in cooperation with Kulturaggregat e.V., a collective of artists and creatives with the goal of bringing more art and culture or subculture into the public space. ‘This kind of collaboration between researchers and street artists is unique, and we are already very excited about the designs which are being created,’ says Darwin Zulkifli from Kulturaggregat. ‘Anyone who is interested in having a one-off picture on their wall should get in touch – we’re still looking for available walls: preferably large, visible and in the city center.’ You can reach the team at the following e-mail address: info@kultur-aggregat.de

From 1st June to 31st November 2019 the “AI tram” featuring a design by the artists Smy and Fritz Boogie will be passing through Freiburg city center. There will be Tram Talks on this tram (Line 4) on Friday, 21st June, 4 p.m. to 5 p.m. and 7 p.m. to 9 p.m., with roboticist Prof. Dr. Wolfram Burgard talking about the subject of AI and street art. During the international robotics conference Robotics: Science and Systems, the tram will carry international guests from the conference to the city center. In May and June, Smy, Fritz Boogie, Innerfields, Marc C. Woehr, Mr. Woodland and Sare will be completing the murals; two locations have already been chosen: the passageway at the social and cultural center FABRIK, Habsburgerstraße 3, and the wall of the building at Humboldtstraße 3 next to College Building III. A special “mural” will be hoisted on 30th July at 7 p.m. – the anti-glare banner on the University Library, which will also include AI motifs. Wall Talks will take place next to one of the murals every Tuesday in July from 7 p.m. – researchers and artists will talk about their cooperation and discuss their points of view with the public. A show of all the works will open at Kulturaggregat e.V., Hildastraße 5, on 14th September and end on 12th October. During the exhibition there will be guided tours for school pupils, film screenings on the theme of “Reality Check on Science Fiction”, workshops and other events. In October and November there will also be guided tours including discussions about the walls.

“Researching City Walls” is a project by Nexus Experiments, an initiative of the University of Freiburg, which takes a special approach to conveying science and ethical considerations: it develops participatory, experimental and creative formats in close cooperation with artists. Sabrina Livanec and Mathilde Bessert-Nettelbeck are in charge of the concept and realization of the project.