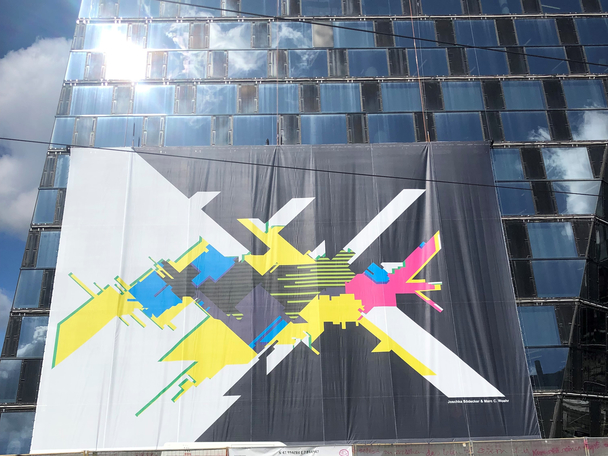 With their penultimate project, Nexus Experiments offer great a great show in several respects. On the one hand, there is the location that can hardly be surpassed in its prominence. Until now, glare protection at the Freiburg UB was only a disdainful necessity in order to protect motorists from treacherous sun reflections. From now on, there will no longer be a glare shield at the same location, but "art on the building", as Dr. Antje Kellersohn, head library director, emphasizes during the festive hoisting of the new eye-catcher.

The celebration itself in the Mensagarten is hard to beat in its prominence, as the first mayor of Freiburg, Ulrich von Kirchbach, and the rector of the University of Freiburg, Prof. Dr. Dr. h.c. Schiewer, are among the celebrities in addition to art host Kellersohn.

Schiewer emphasises that he was fascinated by the city wall project right from the start. To combine the necessity of a glare shield with an artistic statement that gives impetus to think about such a current problem as the ambiguous developments in artificial intelligence fits perfectly with a university that is "Ahead of the Game", especially with regard to the AI: "There is no stronger location for AI in Germany". Ulrich von Kirchbach agrees and praises the attempt, developed in cooperation with the Kulturaggregat e.V., to "get into conversation with the citizens of Freiburg and the region about participative formats of knowledge transfer".

Finally, Schiewer sends the signal for the main act - the ceremonial raising of the work of art - from the small hill in the Mensagarten, which has been converted into a podium, with a "Go!" painted on cardboard. And that, too, is associated with a lot of celebrities. Artist Marc C. Woehr is a sought-after man who not only makes murals, but also exhibits them in galleries worldwide. His abstract geometric forms are usually inspired by city excursions, and perhaps a little bit by Kandinsky. But the inspiration for the city wall project came from his scientific tandem partner Dr. Joschka Bödecker, junior professor, head of the Neurorobotics Lab and member of the BrainLinks-BrainTools excellence cluster. Only the participation of this research centre of the University of Freiburg and the Federal Ministry of Education and Research within the framework of the Science Year 2019 made it possible to finance the costly pressure.

Of course, Bödecker is interested in how AI can be presented at all. AI research has already been successful in presenting deep learning. "I had suspected that Marc might be inspired by this," said Bödecker who was surprised that Woehr was not interested in these parts and that he rejected any kind of figurative representation.

"Painting robots was out of the question for me," says Woehr, whose series of works primarily examine cities in all their facets. "It quickly became clear to me that the application of neurorobotics in epilepsy was exciting for me, where terms such as brain waves, lines, and networks are used. Abstractly, it has similarities to how a city works. When I noticed that, I was immediately on fire."

A good work of art is always open to interpretation, but Woehr gives a few hints on the new art in the building of the UB upon request. In the middle of the picture you can see signal curves from the measurement of brain waves in epileptics. The different coloured levels create a depth that shows that neurorobots really penetrate into the brain. And what does the striking black-and-white contrast stand for? Woehr does not hesitate for a moment: "Light-dark stands for man and machine, whereby man is still the stronger part".

As Rector Schiewer jokingly points out, one does not have to fear that the new art of building could cause more damage to distracted motorists than reflecting sunbeams due to its attractiveness, but attention in the positive sense of the word will always be guaranteed.

More information about the project at: