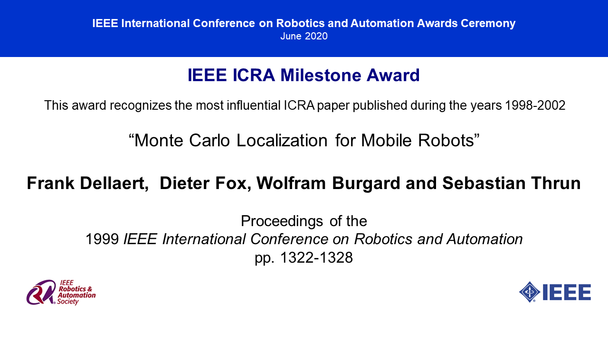 Already in 1999 Prof. Burgard and his colleagues published a paper where they stated: “In this paper we introduce the Monte Carlo Localization method, where we represent the probability density involved by maintaining a set of samples that are randomly drawn from it. By using a sampling-based representation we obtain a localization method that can represent arbitrary distributions. We show experimentally that the resulting method is able to efficiently localize a mobile robot without knowledge of its starting location. It is faster, more accurate and less memory-intensive than earlier grid-based methods.”

This paper is now recognized to be the most influential ICRA paper published during the years 1998-2002. By receiving this milestone award the paper proves to have a strong impact within or outside of the field such as:

The award was handed over during the online award ceremony of the ICRA 2020 which is held completely online this year. It is still possible to join the conference. For Details please visit the conference website. www.icra2020.org