High-ranking guests in the robot hall 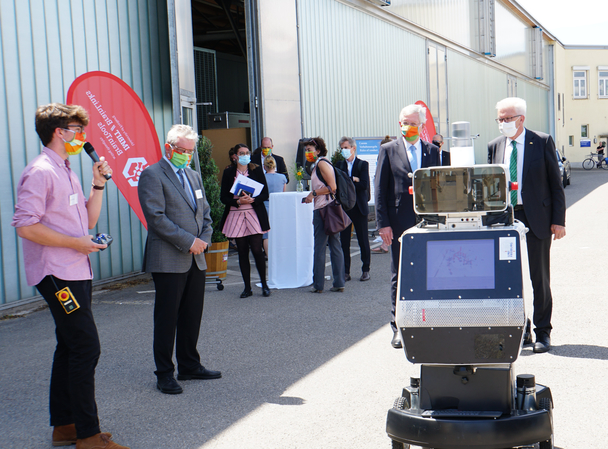 The Prime Minister of Baden-Württemberg, Winfried Kretschmann, and his French counterpart, the President of the Région Grand Est Jean Rottner, informed themselves about AI-related research at the University of Freiburg during a visit to the robot hall at the Faculty of Engineering. 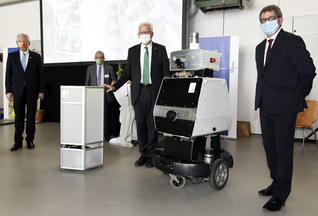 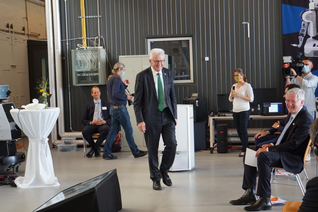 Freiburg researchers were able to impressively show that AI research in Freiburg is carried out at the highest international level.

After the guests, including Freiburg's Lord Mayor Horn and District President Schäfer, had been welcomed by Obelix and led to their seats, the Rector Prof. Dr. Dr. h.c. Hans-Jochen Schiewer, made it clear in his welcome address that the BrainLinks-BrainTools centre and the new research building for Intelligent Machine-Brain Interfacing Technology (IMBIT) in particular offer promising development opportunities for Freiburg's AI research.

Prof. Dr. Thomas Brox, Prof. Dr. Frank Hutter and Prof. Dr. Wolfram Burgard (Institute of Computer Science) presented the current topics of AI research at the Faculty of Engineering, potential fields of application and the international networking of Freiburg researchers, which has recently been further strengthened by the University of Freiburg's inclusion in the European Laboratory for Learning and Intelligent Systems (ELLIS). The doctoral students of Prof. Dr. Wolfram Burgard's Autonomous Intelligent Systems Lab demonstrated AI solutions developed in the fields of human-robot interaction and autonomous navigation in Freiburg.

After some initial hesitation, the Minister President also practised human-robot interaction and was visibly amused by the "Canny" robot's autonomy with a brief comment "Convinced!".

Finally, Prof. Dr. Frederik Wenz (University Hospital Freiburg) also highlighted the research results from the collaboration with BrainLinks-BrainTools in his short article on digitization at the University Hospital.

The interdisciplinary "Responsible Artificial Intelligence" research group at the Freiburg Institute for Advanced Studies (FRIAS) presented by Prof. Dr. Silja Vöneky and Prof. Dr. Oliver Müller look at the topic of AI research against a completely different background. The group, which also includes Prof. Dr. Burgard and Dr. Philipp Kellmeyer, is working on clarifying the normative and philosophical basis of the interaction of humans with AI systems and developing ethical, legal and social frameworks for the responsible use of AI. The short visit to the Robot Hall was concluded by the presentation of the "StadtWandForschung" project by the NEXUS Experiments team, which addresses questions and concerns about AI technologies and their rapid development in the form of large-format murals in public spaces and thus stands for innovative outreach activities of AI research in Freiburg.

The official press release of the University of Freiburg is availabe at http://www.pr.uni-freiburg.de