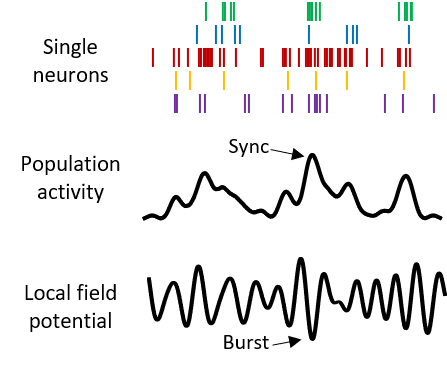 Humans and animals recognize light tactile stimuli in some situations, i.e. they feel touches such as the vibration of a smartphone, while ignoring stronger stimuli in other situations. This paradox arises because spontaneously internally generated and externally induced activities compete with each other in the brain. Scientists suspect that brief outbursts of beta-wave oscillations in the brain, known as bursts, represent the internally generated activities and prevent the perception of external stimuli. But the underlying mechanism has so far only been inferred from theory. Experimental evidence and studies on beta-wave regulation of the perception of stimuli in real time have been lacking. Prof. Dr. Ilka Diester from the Institute of Biology III at the University of Freiburg and the Cluster of Excellence BrainLinks-BrainTools and her research group with doctoral student Golan Karvat have now put the theoretical considerations to the practical test. The researchers recently published their results in the journal PNAS - Proceedings of the National Academy of Sciences.

Beta waves represent the section of the brain wave image in the frequency range between 14 and 30 Hertz. These beta waves occur in the brain even without external stimuli. During bursts of beta waves, several neurons respond synchronously, whereupon the activity, called the firing rate, of the neurons decreases. The neurons then respond less frequently, so stimuli are recognized less often. “We found that this inhibition can be overcome in the sensory cortex,” Karvat says. “The burst prevents external stimulus perception in real time, but by adjusting the stimulus intensity, the effect can be compensated bidirectionally. The amplitude of the external stimulus can be increased or decreased depending on whether more or fewer beta waves occur.”

In their experiments, the researchers monitored the electrical activity of rats’ brains before and during the task of detecting a vibration on their front paw. Neuron firing rates and so-called local field potentials were analyzed across cortical layers and frequency ranges. This confirmed that spontaneously occurring brain activity, which is based on internal factors, is opposite to externally evoked stimuli. “Thus, we show that spontaneous beta-wave bursts compete with externally evoked stimuli in the sensory cortex,” Diester explains.

With their study, the scientists prove a hypothesis that has already been suspected in theoretical work. Moreover, they show that the brain responds more to external stimuli in certain states than in others, depending on the brain's intrinsic and spontaneous activity. Diester emphasizes, “This finding is important for the development of future neuroprosthetic devices that will inscribe perceptions directly into the brain.”

Ilka Diester heads a research group at the Institute of Biology III and Cluster of Excellence BrainLinks-BrainTools at the University of Freiburg that uses optophysiology, i.e. novel optical tools, to investigate the functioning of neuronal circuits. The scientists are investigating the neuronal basis of motor and cognitive control as well as interactions between the prefrontal and motor cortex, both of which are part of the cerebral cortex.