Top research on the doorstep 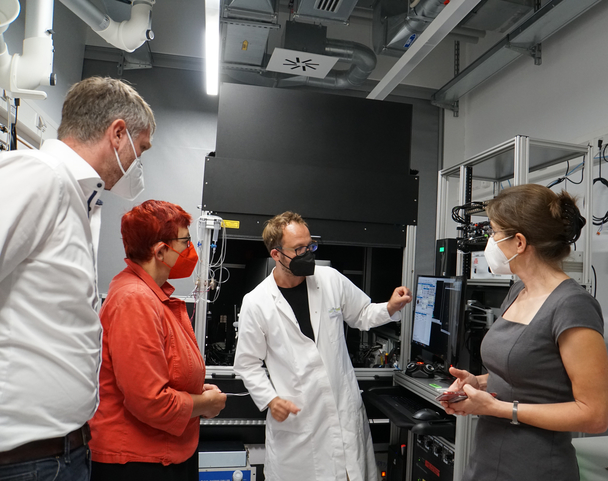 The two members of the state parliament Gabriele Rolland and Jonas Hoffmann visit BrainLinks-BrainTools in the new research building IMBIT. In addition to the tour of the building and the presentation of the research taking place inside, they also talked about the future of research at the site in times of energy crisis. The BrainLinks-BrainTools team and the two members of the state parliament quickly agreed that, despite the prevailing pressure to act, these challenges must be tackled with care and foresight to ensure that research does not suffer any disadvantage only because of its location. Especially in regard to the strong international competition and the upcoming national excellence strategy, research in Baden-Württemberg is in a very crucial phase.
Gabi Rolland, spokesperson for higher education policy for the SPD in the state parliament, says: "IMBIT is conducting cutting-edge research on our doorstep. The state would be well advised to continue to intensively support such regional lighthouses of excellence. Research areas at universities often require a lot of energy. But solutions for tomorrow are developed there. That's why they must be considered separately when it comes to energy supply issues. I expect the state government not just to wait and see, but to deal decisively with the issue of energy supply in the budget discussions."
Jonas Hoffmann, SPD spokesman for digital life adds, "It is important that such sensitive research as that on artificial intelligence does not just take place in the USA and China. Research into the interaction between humans and machines, the read out and the write in of brain signals - possibly even to manipulate the brain to reduce limitations - must also take place in Europe. Only in this way can we help shape such developments with our European values and prevent abuse, for example, when it comes to privacy. Digital and technical possibilities should be researched and developed - but people must be at the center."