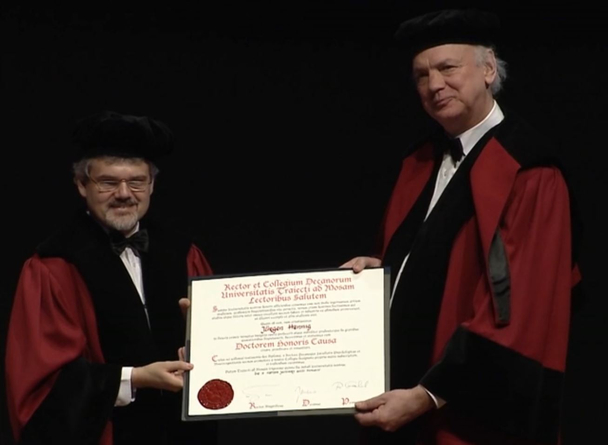 During their 38th "Dies Natalis", Maastricht University (The Netherlands) bestowed upon Jürgen Hennig the degree of Doctor honoris causa, recognising his role as a pioneer in magnetic resonance imaging.

As Rainer Goebel, professor for cognitive neuroscience and honorary supervisor, pointed out in his laudatory speech, Hennig's invention of the so-called RARE sequence ("rapid acquisition with relaxation enhancement") allowed to significantly reduce the time for image acquisition in magentic resonance imaging. This constituted an important step for the use of magnetic resonance imaging in daily clinical routine.

In his acceptance speech, Jürgen Hennig said remarked: "I’m a medical physicist, Rainer Goebel is a neuroscientist. I try to make the spin of subatomic particles work to put some use into diagnostics and research. Having Rainer as a sponsor of this honorary degree gives me the feeling that some of the efforts have not been totally in vain."