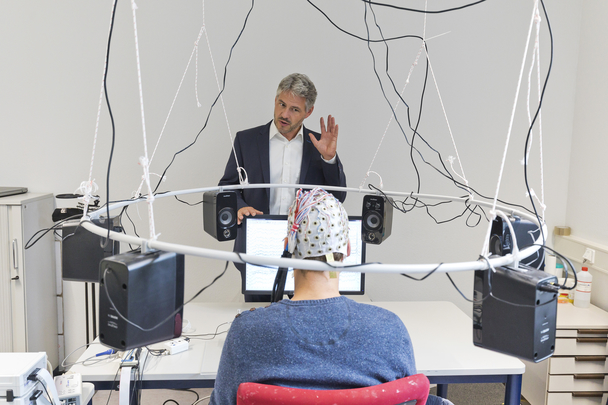 Language deficits after stroke have a strong impact on the social interaction of these patients. A research team around the computer scientist Dr. Michael Tangermann (Department of Computer Science, University of Freiburg) and the neurologist Dr. Mariacristina Musso (Dept. Neurology and Neurophysiology, University Medical Center Freiburg) have developed a novel training method for the improvement of language capability. They recently have received the BCI Award for this innovative rehabilitation approach, which makes use of the brain signals of patients.

The BCI Award is an international research award, which is granted for novel and promising clinical applications of brain-computer interface systems (BCIs). These systems record the ongoing brain activity and analyze the obtained signals within milliseconds using computer algorithms, which can learn from these signals. Thus BCIs enable the control of computer applications merely by brain activity. Embedded into the cluster of excellence BrainLinks-BrainTools in Freiburg, Musso and Tangermann have teamed up to develop a novel application for this technology: they exploited BCIs to improve the language abilities of aphasic patients after stroke.

The international jury of this scientific price honored this research during the seventh International Brain-Computer Interface Meeting in Asilomar, California. The high degree of innovation and the substantial language improvements obtained by Tangermann‘s and Musso‘s approach for patients participating in a pilot study has convinced the jury.

Tangermann and Musso have developed a language task which requires the patients to carefully attend to a specific target word, which is embedded in a stream of multiple other words. Their task is to compare the perceived words and to recognize the target word. Contrary to many existing language training protocols, it is not necessary to produce words. While patients listen to the stream of words, their brain signals are recorded via an electroencephalogram (EEG). The ability of the EEG to represent cognitive processes with a high temporal precision is of specific importance for the investigation of language processes. Making use of machine learning algorithms, the researchers can analyze in quasi real-time those characteristic brain signal responses, which are elicited specifically by target words, or by the distracting non-target words. After playing the word sequence, patients receive immediate feedback about the analysis of their EEG signals. „This feedback shows the patients, how well they did in the word task. It helps them to develop and use a successful strategy“, explains Musso.

The novel high-intensity language training takes three to five weeks and is performed on four days per week.  The stroke of the eight patients, who have undergone the training so far, happened months to years prior to the training start. The results so far are promising: the team has observed a training-induced improvement of several language competences (pronunciation, naming of objects, understanding, reading and writing).

In Germany alone, approximately 25,000 people acquire a permanent language deficit caused by stroke. „The high societal impact of these stroke-induced language deficits and the positive feedback we received in the context of the BCI Award encourage us to push this research forward. Our goal is to have this novel BCI-supported language training protocol establishes as a therapeutic option in standard rehabilitation health care“, explains Tangermann. The scientists currently plan a larger study starting by 2019 to investigate the mode of action of the training effect in further detail. In addition, the study shall clarify, for which patient group and for which type of stroke the novel therapy is most efficient. Applied by a language therapist, the novel training approach could support the traditional forms of language therapy.