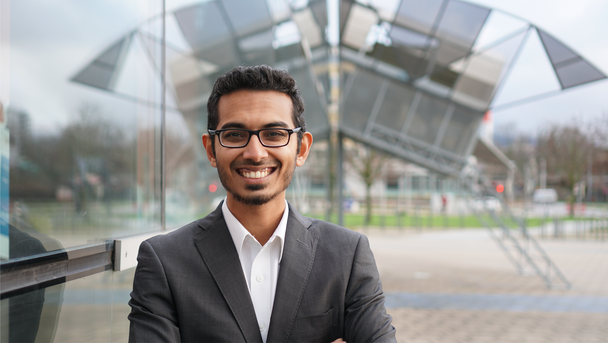 BrainLinks-BrainTools member Abhinav Valada and his group develops algorithms for robots to navigate among crowds.

Prof. Dr. Abhinav Valada, Assistant Professor and Head of the Robot Learning Lab at the Department of Computer Science of the University of Freiburg and member of the Center BrainLinks-BrainTools has obtained funding from the German Research Foundation (DFG) for the Emmy Noether Programme in the field of “Methods of Artificial Intelligence”. Under his leadership, the group will spend the next six years researching how mobile robots can navigate autonomously among people in urban environments that were previously unknown to them. The robots will learn their behavior with the help of algorithms based on subfields of Artificial Intelligence such as deep learning and reinforcement learning. The project, titled “Efficient Learning for Transferable Robot Autonomy in Human-Centered Environments,” will start in April 2022. "The fact that we can now work on our research ideas with the support of the DFG's Emmy Noether Program makes us extremely happy and gives us enormous opportunities, including strengthening our international visibility," says Valada. The funding program includes funds of more than 1.7 million euros.

Robots with artificial intelligence (AI) can already find their way around their environment independently and navigate through them if they have learned what their operating environment looks like. However, encountering humans in dense urban environments has been difficult since their movements and interactions is challenging to predict in advance.

Valada’s team aims to develop new methods that allow mobile robots to autonomously navigate in a socially acceptable and safe manner through busy urban environments such as pedestrian zones and sidewalks. “Most importantly, the same autonomy algorithms should work as independently as possible from the type of sensors on the robot and mode of locomotion, while being capable of generic application across previously unknown environments. A four-legged robot in New York would then learn using the same algorithm as a wheeled robot in Freiburg”, Valada states.

To this end, the researchers are using artificial intelligence techniques such as deep learning and reinforcement learning to help the robots learn on their own and improve their skills without human intervention. In addition, the team is devising learning methods that will allow the AI to transfer learned knowledge across different tasks, modalities and environments, while functioning independently of the robot’s hardware. “This will make robot autonomy truly scalable”, says Valada.

The DFG’s financial support for an Emmy Noether AI Group strengthens young researchers dedicated to artificial intelligence methods. The DFG enables career options with a high level of autonomy at an early stage. The funds are initially granted for three years and are available for an extension of another three years.

Original press release of the Office of University and Science Communications